The Ghosts of Karim Benzema

Karim Benzema Is an Asset, but France Can Get by Without Him | Bleacher Report

Yep. The team’s performance in friendlies agains the Netherlands and Russia confirm just that. Karim Benzema is a unique and talented forward but he doesn’t necessarily elevate France’s attack.

Great piece here. I think you would have to even put Luka Modric in the mix. Ronaldo will always bang in the most goals but he really couldn’t do what he does without that trio.

Karim Benzema could be the answer up front for Arsenal – ESPN FC.

Could we have another attacking superstar fall into our lap? I’m not so sure. I don’t think Perez is that crazy.

You know the scary thing about Benzema? He’s still only 26. The expectations on him for France are understandable, and will increase without Franck Ribery, but Julien Lauren’s makes a great point about the difference in his roles for club and country.

France has been very good in 2014 without a standout player in the attacking sense, which is why Benzema is looked to as the star. He does, after all, play on the most high-profile team out of all of his compatriots and he’s performed pretty consistently for them as well.

Minus his first season, Benzema’s been in double digits and added a decent amount of assists as well. Still, he just flies under the radar.

It’s been nice to see the French resurgence but they won’t progress unless goals come from elsewhere. Benzema’s the most experienced(77 caps) and highest-scoring(25 goals) player in the national setup so he should still be leading the way but he can’t be entirely to blame if things go wrong either.

Guess we can only watch and see what happens in that regard.

I haven’t written about anything Arsenal-related as much as I’d like but there hasn’t been much to feed on so far besides a constant barrage of ridiculous transfer rumours. And then there’s that thing about Cesc Fabregas which we won’t mention again.

There’s still two months left in the summer, and anything could happen, but it looks like another long wait for some official news. I’ll only take anything from Arsenal.com as reality on new signings.

What was my dream for Arsenal’s activity so far? Well, anything  really. The incident surrounding “he who shall not be named” is a prime example of a missed opportunity, not to mention the situation with Carlos Vela, and for all the rumours so far it seems unlikely that anybody will sign before the World Cup ends. 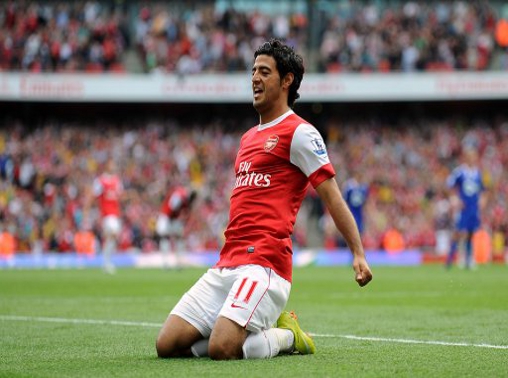 I, for one, would have loved to see Carlos Vela back in an Arsenal shirt. Will we use the extra money to sign someone useful?

Arsene Wenger certainly felt that would be the case and while he’s somewhat right in that a lot of big teams haven’t made moves, there’s still been some activity from the likes of Chelsea, Manchester United and Manchester City. Some of those moves involved players involved in the World Cup.

As has been the case for the past few summers, Arsenal’s rivals have already gotten the jump on strengthening key areas of the squad, while Arsene Wenger’s been on holiday . Doing this. Even then, there are fans of other teams begging Wenger not to steal their stars. Don’t worry, he won’t.

Actually, he’s in Brazil scouting for the next youth star to raise up and sell, or he’ll pick up some obscure talent.

It’s as this point in the summer, after seeing all the other activity, that Arsenal fans, especially those paying week in, week out for tickets at the Emirates, should enact some retribution, Stewie style. And if there’s still no proper action by August then there’s always part 2.

Okay, maybe that’s harsh and I’m reacting a bit too soon when, as mentioned before, there’s two months left in the transfer window.

My frustration is down to seeing other teams make moves, and seeing the  number of players linked to Arsenal that we’re highly unlikely to buy. Same old, same old.

Was Mesut Ozil a one off?
Or will he be joined by more?

Some Arsenal fans seem to get too excited with every mention of a quality player, and after the signing of Mesut Ozil it’s not too far-fetched to say we’ll spend money. Given the top options touted though, I still doubt it. Nobody, minus probably a select few, knew about the Ozil signing and I don’t see Arsene Wenger being happy with his supposed big-money targets being tweeted and reported by every Tom, Dick and Harry.

Serge Aurier? – seems the most plausible as he fills as need and Wenger has worked with Ivory Coast players before.

Karim Benzema?– Already unlikely, and he’s certainly prized himself out a move with his World Cup performances so far.

Alexis Sanchez? – Barcelona would be dumb to let him go, and he’s another player who’ll cost some change after the World Cup.

Arturo Vidal? – Juventus would raise eyebrows with the sale, and all Wenger said was that he’s a great player.

Mario Balotelli? – Really? Does anybody think Wenger would want this headcase in the team despite his talent?

Those are some of the big-name or most linked players in terms of transfer rumours to the Gunners, and I don’t see any of them as a reality. Maybe the likes of Loic Remy and Morgan Schneiderlin, sorry Southampton fan, are more attainable.

Now, I’m not saying we can’t attract those top players but those players in particular seem pretty tough buys at this point.

I guess we’ll see when August ends how the team has changed. Hopefully it has for the better.

On another note, I’m adding a new category, books, and I’ll start with a book that every Arsenal fan should read “So Paddy Got Up -An Arsenal Anthology.” I know I’m behind the 8-ball as far as that’s concerned, and a few of the articles concern event surrounding Arsenal in 2011, but its a good read nonetheless.

Karim Benzema Is the Dream Arsenal Signing That Feels Too Good to Be True | Bleacher Report.

Can lightning strike twice in a row? Two Real Madrid purchases in two years? Hmm. I’ve wanted Karim Benzema at Arsenal for some time, and would be extremely happy if Arsene Wenger makes this move.  Benzema will see a return to a more mobile and technical striker, than the more straightforward Olivier Giroud. Still not a fan of the fellow.

Like the article says though, it may be too good to be true. I still don’t trust Arsene Wenger with big signings even after Mesut Ozil.